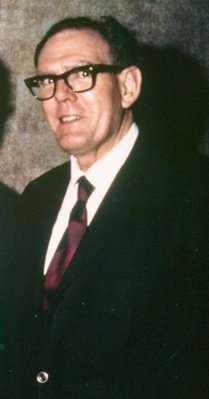 Rod Sell.
My earliest memories of Ron were at the Society meetings when he would update us with the latest yearly issues produced by AMORs.  There were always an interesting collection of medals and badges produced, some very elaborate one offs for University Prize winners.
During my years as editor I needed a photo of the Naval General Service Medal with YANGTZE bar, for an article on the "Escape of HMS Amethyst" that I was writing for the report.  Ron responded to my request and I spent a lovely sunny Sunday afternoon at Castlecrag photographing his medal.  He also gave me a spare copy of  British Battes and Medals, fouth edition which I still use.
In recent year I managed to pick up on EBAY a collection of the report of the ANS and  NSNSW of the 1940s.  These belong to member G. C. Crump of Huntington  W. Va. in the USA.  Ron was the Secretary and editor at the time and the Reports make very interesting reading of the amalgamation of the two Societies.

Ron's exact date of joining the Australian numismatic Society is not known with certainty, however he was member 93 and a regular attendee, as a lad, at Society meetings in Dr. Abbott's room in Macquarie Street, Sydney mid 1930s.
This would have been circa 1935 when, after leaving his school at Scot's College, he became an apprentice to W.J.Amor/A.H.Byatt, Medalists and Die Sinkers, Sydney.
In 1934/5 Ron's father, A.H.Byatt of Harvey C. Smith, Lodge and Regalia Supplier and W.J.Amor (aged 70) amalgated and traded under the name AMOR Ltd.
In the late 1920s and into the 1930s, the ANS became virtually inactive with a new generation of numismatists forming The New South Wales Numismatics Society spearheaded by Owen Fleming and Ron, the founding Secretary with Membership number 3.
An amalgamation of the two numismatic groups became a reality in 1949.  W.J.Amor was a member of both groups with number 30 (old ANS) and 142 (new ANS/NSNSW)
Ron rose through the ranks, completing his working life as the general Manager of what had become Amor Sanders Ltd.; having absorbed W.J.Sanders, silversmiths (1970) and Denham, Neal & Treloar, badge maker (1985).
Versed in all areas of numismatic and paranumismatic design and production Ron's own collecting forte was the Naval General Service Medal.  His personal collection, significant in numbers and of high quality, was sold in London by Spinks a few years ago.
Ron's interest in the ANS never wavered; Recent Medals by Amor was a regular presentation at Society meeting for many years.
In 1988 Ron co-authored the publication of The Amor Centenary and issue of the AMOR Centenary Medal.
The Society extends its sincere condolences to Ron's wife and family and its apprectaion of  Ron's contribution to our Society and Australian numismatics in general.