Members met for a drink at 6pm on the Friday Night.  Julie and Phil Benjamin, speaking with Rudi Talmacs on St George.

Hugh Armstrong and Peter Atherden, finding a seat for dinner.  Vi Armstrong already had her seat.

After dinner we had an Auction.  Rod Sell and Pat Walsh, checking the different weight lots.

Tony Hoare watching the sale of his Tinnies.

Stephen Appleton and Colin Thomas, checking some of the lots.

Tony Hoare checking some of the lots, ticked as being of interest.  Only the lots with a tick, were auctioned.

Rod Sell recording the winner of each lot and sale price.

Checking the correct price was recorded.


Saturday morning: 8.30 am registrations and issue of Conference name badges, Certificates of Attendance, voting slips and programmes. Set up displays.

Sharing a joke before the serious talks started.

Another joke is told.

John Armstrong wondering what to expect.

President John Veltmeyer, welcoming the Members to our 2016 Conference.

A minutes silence, in memory of  ANS Members no longer with us.

7 Members had passed on since our last Conference 2 years ago.


Members then introduced themselves and advise what they collect.

Some members preferred to look for treasures.

Vi Armstrong gave the Tea a miss, because of the many steps.

Members getting ready for the next session.

David  Mee   The Coins of the Angevins

Colin Pitchfork   Some Interesting Coin in my Collection. 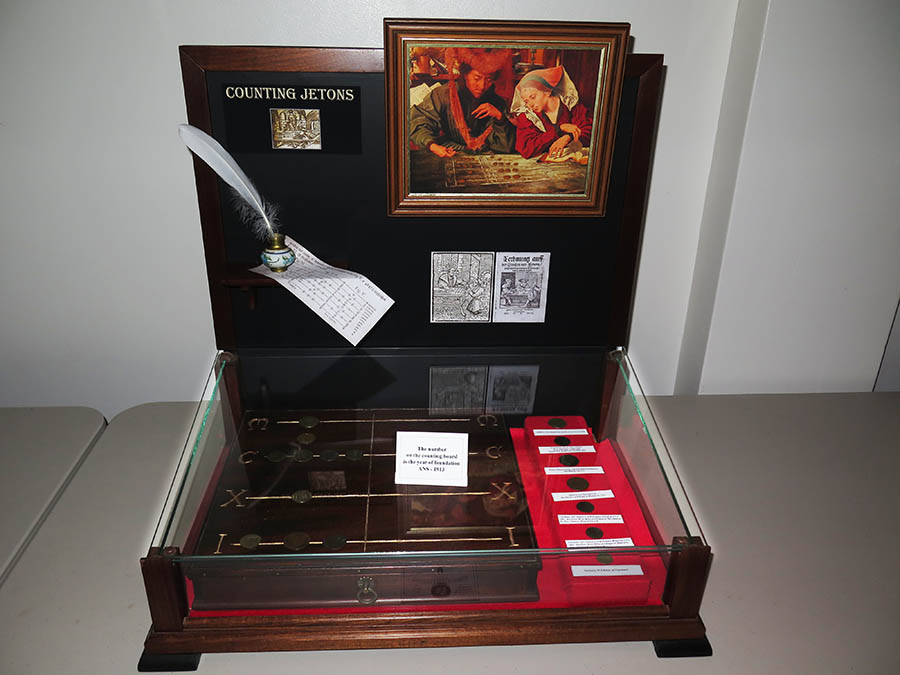 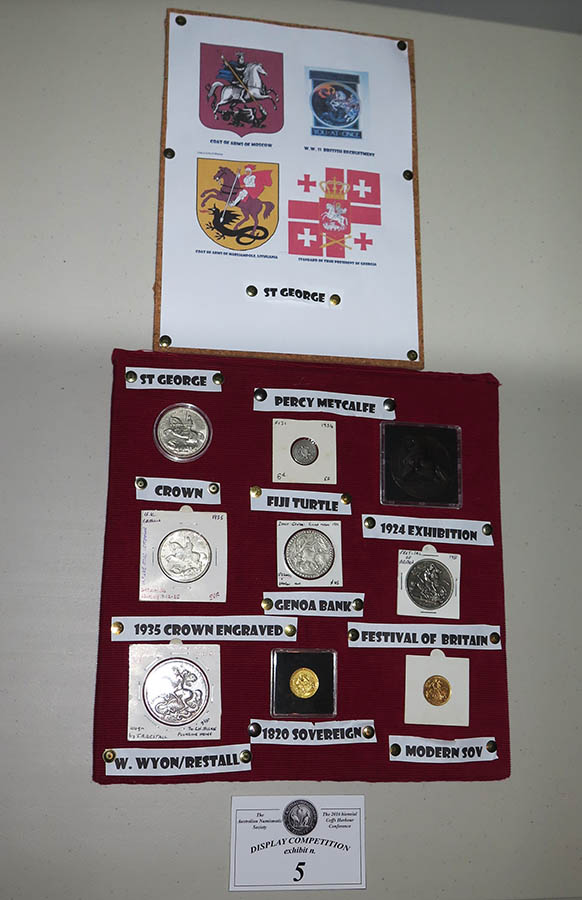 Michael Tichy and John Veltmeyer.  Who took the photo?

The group around the bar

How big was that fish?

Michal Tichy having a break from taking photos.

John Pearn making sure the glasses were filled.

Waiting for the food.

Plenty to talk about.

Patron John Pearn, getting ready to Chair the session.

Judith Mee and John Kennedy, waiting for the Talks

Hugh Armstrong  Medals of the Horticultutal Society of NSW 1868.

Welcome back from Morning Tea.

Close ups on the star and radar notes.

Colin Pitchfork   Some More Interesting Coin in my Collection.

Time to review the displays and vote for the Best Display 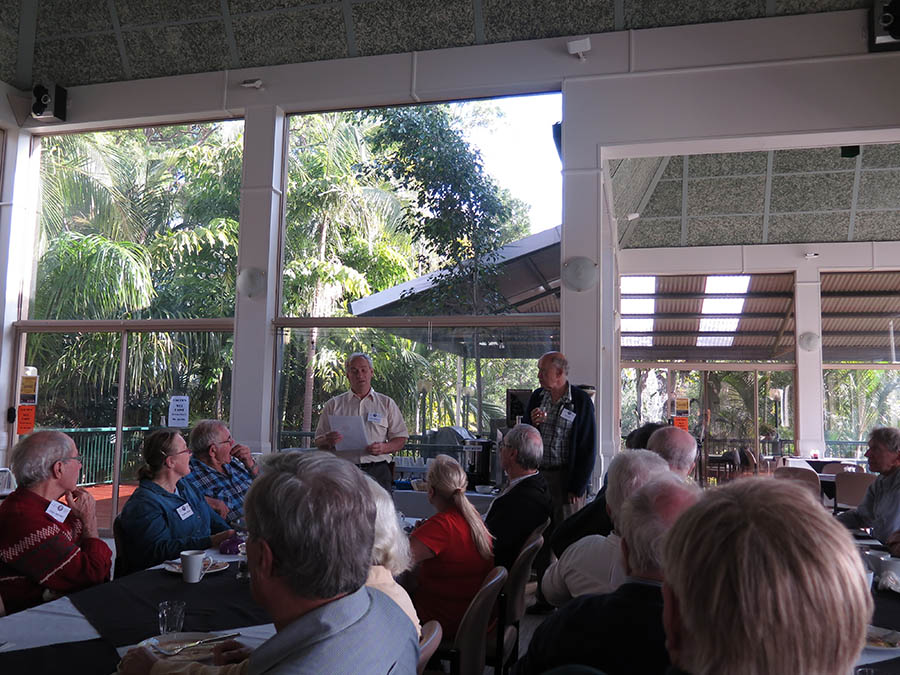 John Veltmeyer announcing the Winner of the Best Display.

Presentation of the Best Display Medal to David Mee

After lunch we had a Group Photo taken.

The young girl from the resort, who took  a dozen or more of the Group Photo.

We all said CHEESE.

Rudi Talmacs  Pistrucci's  "St George slaying the Dragon"  a study of it's conception.

Ross Pratley  Some Bits and Pieces from a Puzzel Down Under.
Ross gave a very good talk on Postal Notes, mainly from Queensland.

Bernard Begley " The Fineness of 19th & 20th Century Silver Coinage"
There were many challenges in the years immediately after the arrival of the First Fleet, and as numismatists we take a great interest in the details of Gov. King’s 1800 Proclamation which set the values to be given to the hotchpotch of coins then found in the colony of NSW. Setting these values in excess of what they were accepted for elsewhere, creating fiat currency, was designed to keep coinage in the new colony and similar tactics were tried elsewhere in the world. The Holey Dollar and Dump’s stated value of 6/3 was well above their silver value of approximately 5/-, did the same thing.

David Mee - "The coins of the Angevins"
The name Angevin means someone from the former French county of Anjou, specifically the count, his family and descendants. Anjou is a small region on the northern bank of the Loire river in France with capital Angers. In the 9th and 10th centuries, the counts owed allegiance to the Kings of France, but ruled fairly independently. In the middle ages there were 3 separate instances of the house of Anjou which firstly became powerful, only to be eventually absorbed into the domain of the French crown. They then became separated again, as the county, a few generations later was given to a younger royal brother. This happened twice until finally Anjou was incorporated into the French kingdom till the revolution. This talk is about their successes, territorial expansion, failures and the coins they produced for their various domains.

Judith Mee - "The Chaucer connection"
Most people have heard the name Geoffrey Chaucer, and almost as many would be able to name his best-known work, The Canterbury Tales. Fewer people are aware that he is considered the ‘father of English poetry’, and even fewer still know that he was to 14th century English literature as great as Shakespeare was to the 16th century. So, what’s the ‘Connection’ to a numismatic conference? This talk will examine some of the coinage mentioned specifically by Chaucer in The Canterbury Tales, explore some little-known facts about Chaucer’s career, and look at some of the important coins he would have encountered in his extensive travels.

John Pearn -" Family Medals - Enduring Kindred Heritage"
Medals and medallions are the most enduring of all family heritage. As the generations pass, the artefacts of life are discarded or degraded; and often the sole physical referent of a forebear is a military or tribute medal, preciously conserved down the generations. Numismatists have a role in fostering such heritage, and in the preservation of history which such endeavours entail and promote. Two medals are documented which illustrate this theme. The James Benn-Doreen Carbutt Family Medal (2015) and the Pearn Kindred New Horizons Medal (2016) both commemorate a family’s emigration from England to the Antipodes and the foundation of new kindreds. Patronyms are thus preserved, and great personal family events documented in this most enduring of all archives.

John Pearn - " Secreto in Numismatica -Hidden messages on coins and medals"
Secret and encoded messages are a pragmatic necessity in commerce, diplomacy and in warfare. They also hold a fascination in peacetime and are common themes in art, literature and the symbols of communication. Steganography, or “spy writing”, has existed since the time of ancient Greece. Cryptic pictorial images, secret initials and codes are portrayed in many art mediums. But fine numismatic art on coins and medals also contains many examples of secret images. Such include hidden graffiti, codes, chronograms and enigmatic messages. There is a pleasurable frisson in hiding or burying treasure, as moneyers and medallic sculptors have enjoyed for more than a millennium. Equally, there is pleasure in deciphering secrets. This paper describes the enrichment of discovering a horde of hidden numismatic treasure.

John Pearn - " The Numismatic Heritage of Medicine"
The history and heritage of medicine is recorded in many forms. The most enduring archives are those to be found in the numismatic record. From the era of ancient coinage are preserved images of healthcare themes. Such range from medical herbs to deities. Every significant discovery in medicine has been commemorated in medallic form. Significant men and woman in the history of medicine also have their enduring memorials in medallic record; and occasionally on coins and bank notes as well. More than 15,000 medals comprise the international medical numismatic cabinet, of which more than 600 different Australian medals are but one part. The selected review of this numismatic collection gives a perspective of the evolution of healthcare which we enjoy today.

Barry M Scott - " Chinese Money Trees"
A fascinating story of how MONEY TREES began in China and their evolution. The method of casting coins in moulds began in the period before Christ was born.   Some real ancient and very rare exhibits will be presented as well as other MONEY TREE stories. Some most unusual designs of MONEY TREES will be shown and the stories of their background will be told. Chinese legend has it that the MONEY TREE  is a kind of holy tree, which can bring money and fortune to the people, and that it is a symbol of affluence, nobility and auspiciousness,   It can be traced back to primitive societies where the adoration of a holy tree was prevalent.  Whilst MONEY TREES may be derived from the Sun tree myth associated with Paradise, the coins link paradise with a material bounty in this world. Some modern MONEY TREES  have evolved and large examples are shown in Chinese shopping centres. This is an unusual and different numismatic story from ages past and will give an early perspective of how the present Chinese economy has grown.

Rudi Talmacs  Pistrucci's "St. George Slaying the Dragon" a study of it's conception.
The main purpose of my talk (actually done in conjunction Michael Tichy) will be the art-historical analysis of the actual design of Pistrucci's iconic image. To show some aspects of the analytical implications and historical origins, I will try to bring out the ambiguity in Pistrucci's design, where his "St George" is not quite the same guy as on, say, the 1935 "Rockinghorse" crown, and others. I hope from this study to offer a judgement as to the best understanding of Pistrucci's artistic intent.

Michael Tichy- " Counting Jetons"
Jetons or counters were used as calculation instruments in Europe in the middle ages. According to medieval taste, they were always decorated. These decorations always had a purpose, sometimes religious, but usually related to the user or the principal. In the 16th century, jetons were mostly used to propagate political messages and to glorify the deeds of the ruler.