The Australian Numismatic Society was formed in February 1913 in Sydney.

In 2003 we celebrated the 90th Anniversary by producing a medal which was
given to all financial members. 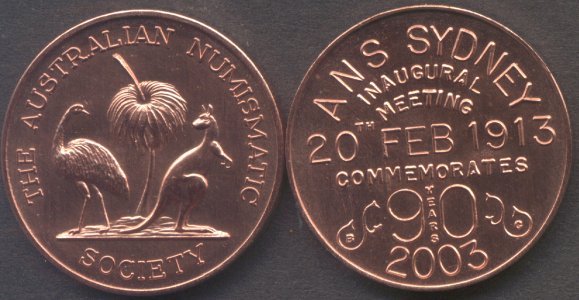 It was also decided that we should take steps to celebrate our upcoming
centenary.  I suggested a bimetallic project as these are unusual numismatic
items.  It was agreed that every year up to 2013, members would be given
either an encased Australian coin, or a bimetallic medal.  The Canning mint
in Queensland was contacted and agreed to produce the items.

Since the ANS was started in 1913, it was decided we would encase coins of
1913, 1938 for the 25th Anniversary, 1963 for the 50th Anniversary and 1988
for the 75th Anniversary.  The coins to be encased were the halfpenny, the
sixpence and the shilling.  These values were chosen as we had the tooling
to produce the rings for coins of this size.  The two cent, five cent and ten cent
coins could also be used.

In July 2003 with the start of the new membership year, every financial
member was given an encased 1963 halfpenny.  1964 was the last year of our
predecimal coins and these coins were fairly easy to obtain in high grade
for encasing.  A total of 165 were encased and distributed to members. 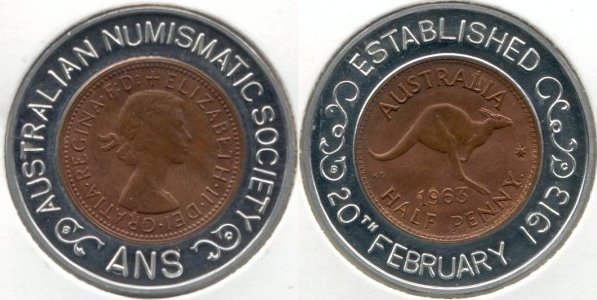 In July 2004 an encased 1963 sixpence was distributed to all members.  170
were produced, again in high grade.

The 2005 coin was a bimetallic medal to commemorate the 150th Anniversary of
the Sydney Mint.  A gold coloured centre variety was available for members to purchase.

The coin issued in July 2006 was the 1963 shilling.  Our
membership has risen in the past few years so we produces 185
The reverse ring shows our old website address as these
were produced before we obtained our dedicated address. In 2007 we issued a bimetallic medal to celebrate the 75th Anniversary
of  The Sydney Harbour Bridge.  A gold coloured centre was available for purchase.

2008 was the half way mark of our Project and to celebrate 5 years to go, we
produced a special encased 1913 halfpenny.  The item is actually in 3
parts, there will be an aluminium ring.  The centre will have a copper ANS
logo of the Emu and Kangaroo, within this was encapsulated the bronze
1913 halfpenny.  This medal was 3mm thick.

2010 members were given an encased 1910 threepence 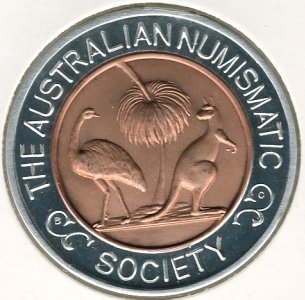 2012 members were given an ANS Holey Dollar 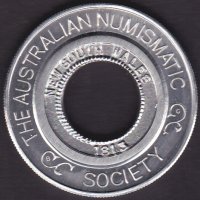 2013 was the highlight of our Project.  The medal  given to members was and encase 1913 shilling.

The 1913 shilling was a difficult coin to obtain.   Members who wanted a higher quality 1913 shilling
supplied their own coin, which we encased return to them in the 2013 distribution. 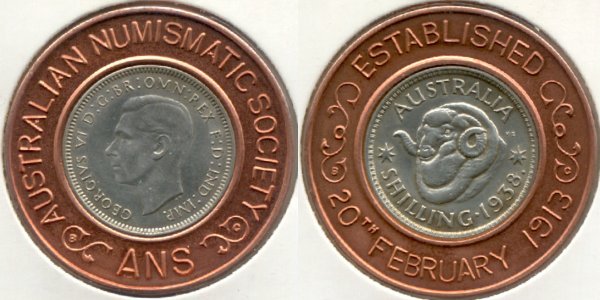 This has been a very interesting project and I am sure by 2015 members will
be very pleased with their collection of ANS encased coins and bimetallic medals.